Douglas S. Bruce at the playing fields of Goldenacre, Edinburgh in 1959

When my Uncle Douglas kindly asked if I would design the cover of his first book, a memoir of his life’s passion, the game of Rugby, it wasn’t long before I found the perfect image. During a visit to the beautiful Isle of Skye and chez Bruce, I discovered an old sepia photograph of my Uncle aged 10, oval ball under arm, standing on the playing fields of his Edinburgh school, anno 1959.  Catching sight of the Victorian ‘Red Pavilion’ in the background of the photograph, George Heriot’s cricket club, where the head groundsman and his wife who were friend’s of my father’s lived, pressed the play button in my head and played out a whirlwind of technicolour images of blue faced winged monkeys, beguiling ‘Ruby Slippers’ and dog ‘Toto’ accompanied by the rousing ‘Ride of the Valkyries’; memories of a Christmas visit when I was a child.  A peppering of pigeons flying through a dreich Edinburgh skyline echoed the garden scene through the Skye window, of woodpeckers and blackbirds fluttering around a creatively constructed firewood bird-table, under the shadows of the Red and Black Cuillins.  And the boy, that bonny blue-eyed, hoop shirted child who’s escapades my mother never ceased to amuse my sister and I with, grew into the wonderful uncle who stood beside me in 2012 making us toast.  Reading ‘Wrapped in Rugby’ informed missing generational times before I was born, because this is no ordinary sports book! 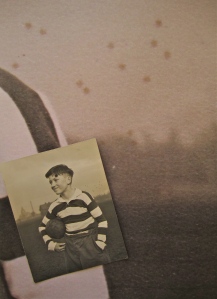 Back cover detail of ‘Wrapped in Rugby’.

I am a football and cricket girl, although would not normally choose to read sporting books of any sort, being most comfortable reading the likes of Roberto Bolano’s ‘2666’ or Maxim Gorky’s ‘My Childhood’.  But even the sections solely devoted to rugby are enlightening for us round ball game lovers, a converting education!  The recounting of a brutal rugby match in the 1960’s on a bleak hung-over Scottish New Year’s Day in the Borders town of Hawick, fought on a frozen pitch turn into literary hilarity,

“The playing surface was like concrete and worse, vehicles had been driven over the pitch when it was muddy.  The tyre impressions were now like a scattering of lumberjack’ hand saws.  It was a suicide mission for both teams if the game was to go ahead.  To go ahead it was (and) like the ANZACS at Gallipoli we did as we were bidden and prepared for suicide.’

There are so many beautiful turns of phrase, metaphors, so much `laugh out loud’ inherited Fife wit I needed a second copy of the book to annotate or the precious signed copy I was reading would have been graffitied all over!

Of course I am a wee bit biased, I’m reading a book by the best uncle in the world!  But I hope I’m fair also.   I found it an eloquently written social history of Edinburgh in the 50’s and 60’s, recounting hysterical life stories, stories I hadn’t heard before, relating tenderly and artfully moving tributes to the likes of my Grandfather, all whilst managing to successfully engage a sub-consciously reluctant niece to understand his enormous passion for rugby. Entwining a history of twentieth and early twenty-first century Scottish rugby throughout the book he reveals personal observations of the politically charged scrum from amateur to professional Scottish rugby. There are many people including my father who will remember fondly the game as it was and for them this book is a tribute to those selfless days when rugby was played for enjoyment, camaraderie and passion. For younger rugby loving generations this is a history of the game their forefathers played with carefree abandon, and unrestricted innocence. Also recorded are my uncle’s tireless efforts to bring rugby to smaller Scottish communities and their younger players as well as the Scottish community at large and it’s youngsters spurred by his passion for the game – it is an inspiration and revelation to me of someone I know well under different circumstances, giving back something they love to others. This is an epic memoir in my opinion, honest, affecting, beautifully written by a very humble, funny and passionate man, my uncle.