Outside a white-out blizzard howls, while war is waged through it.  Mrs Wolf throws open the door of ‘The Wolf’s House’ and looks out at the soldiers fighting around her cottage.

‘The Wolf’s House’ is symbolically one of the simplest pieces I have created for it simply asks “who is more civilised, man or animals?”.  A take on the iconic cuckoo clock, it was inspired by a cuckoo clock my father brought back to Scotland for me after a trip to Switzerland, when I was a child. 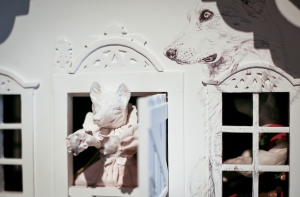 The piece explores the juxtaposition of the roles of man and animals suggesting the idea of the ‘innocent’ instinctive nature of animals as opposed to the cerebrally determined brutal nature of man.  ‘The Wolf’s House’ is a beacon of light representing civilised society whilst chaos reigns outside; but it is occupied by wolves not humans.

Soldiers fight in the snow around the Wolf’s House whilst Mr and Mrs Wolf witness war, as animals of the forest play peacefully inside the house.  However there is an ever present threat from humans.

Further inspiration for the piece came from a photograph of Russian soldiers fighting through a village towards Germany after the end of the battle of Stalingrad when the tide of war has changed.  I imagined a cottage somewhere in Eastern Europe encircled by soldiers fighting a brutal war.

‘The Wolf’s House is a mixed media piece which includes original black Biro drawings of Lily drawn on painted, sanded MDF.  Model railway snow and glitter were used to create the winter snow scene on the roof and base.  Printed transfers on fabric formed the wallpaper of the interior walls, complete with propaganda posters specifically designed for the piece.  I sourced replica Russian F1 hand grenades which were then painted with white enamel as were the model soldiers, German Assault Infantry in winter gear and Russian Army Assault Infantry.  An authentic cuckoo clock chain bought from a clock shop holds the hand grenade weights of the clock.  ‘Mr and Mrs Wolf’ were made from casts taken of the wolves heads from my wedding cake-topper and the bodies of vintage Polish Capelia dolls bought on Ebay.

Mr Wolf sits by the window surrounded by propaganda posters and watches bears, a wolf, a fox and a tiger cub playing together.

‘The Wolf’s House’ interior shot through side window.

Their play indicates that each species has it’s own social structure and behaviour which is rarely disregarded but whilst humans have a highly developed sense of morality, the moral codes by which we live are often breached. 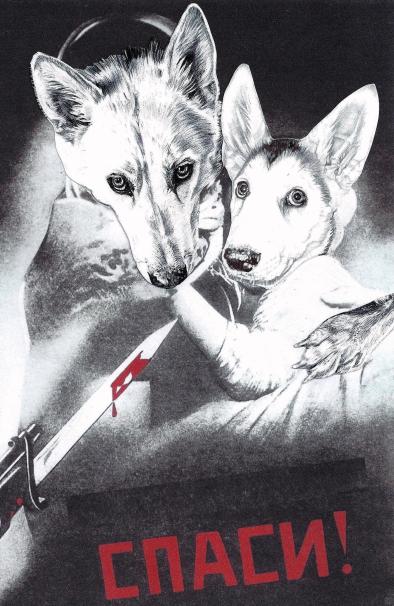 ‘”Save Us!’, 2012, Propaganda poster for the Wolf’s House, photo montage by Jane Lee McCracken

Ultimately the futures of many species’ are held in our hands and this is symbolised by ‘The Wolf’s House’ and the ever present battle around the house and its occupants. 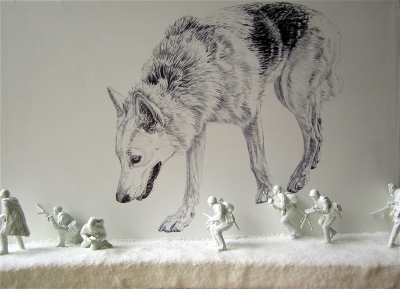 Luxury Archival Pigment Prints of ‘Save Us!’ made by the excellent Jack Lowe studio are available to order from my website

‘”Save Us!’, Propaganda poster for the Wolf’s House, Archival Pigment Print

4 thoughts on “The Wolf’s House”