Beautiful, adaptable and rare, the elusive Red wolf was once common to the eastern United States where it roamed for thousands of years. Now, critically endangered the wild population of just 45 individuals inhabits northeastern North Carolina, while a captive breeding program includes 200 wolves. Jane’s red Biro (ballpoint pen) drawing entitled ‘Red Wolf’ made for the Wolf Conservation Center, New York captures the beauty and fragility of this enigmatic creature whose wide-ranging habitat once included swampland.

With kind permission of WCC Jane used images of their Red wolf pack as inspiration for her drawing. She asked Executive Director Maggie Howell and Curator Rebecca Bose what their own personal favourite qualities of the Red wolf were, and they both agreed “a strong sense of family”. Therefore ‘Red Wolf’ celebrates the three stages of a wolf’s life from pup to juvenile through to adulthood. While an adult Red Wolf treads quietly across a page of history, through a forest of Cypress trees covered in Spanish moss like lacework through its fur, its young pup waits in the den. A Whitetail fawn drinking from a forest pool suggests the tranquillity of nature. Sibling juvenile Red wolves tentatively emerge from the forest, inquisitively exploring the world around them while the adult watches over them.

For further information about the Wolf Conservation Center visit www.nywolf.org 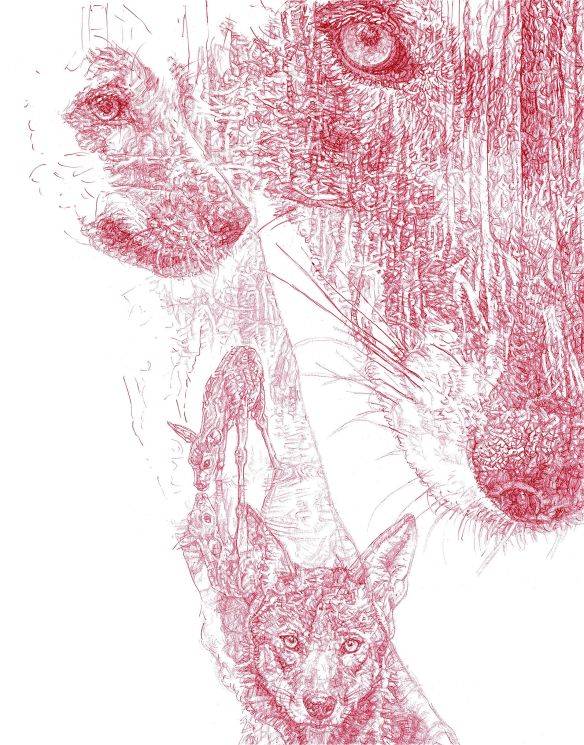 Judging of ‘Wild and Endangered’ my new drawing competition for school students commenced today!  And what a day!  Piloted at a local primary school in North East England, the competition focuses on developing students drawing skills, whilst learning about endangered species.  The first competition has seen an overwhelming response with nearly every student participating.  The standard of artwork is extremely high with ardor and creative expression evident in each entry, Judging is proving tremendously uplifting and challenging in equal measure!

The competition is simple, “create an A4 drawing made with a drawing medium of your choice, of an endangered species of your choice”.  Entry fee is £1 per entrant.  Profit after prizes goes directly to eminent international wildlife charity the Born Free Foundation and a charity of the school’s choice.  The competition seeks to further encourage children’s natural passion for drawing and animals and was inspired by ‘Drawing for Endangered Species’ workshops.  Donating my time to judge the competition and design a poster from winning and runner’s up entries is an uniquely rewarding experience.

The poster design of students artwork will be presented to the school as an opportunity to raise funds through poster sales. Winners and runner’s up will receive a copy of the poster design that includes their artwork. Winners will be announced during the summer term.

A huge thank you to the staff and students of this local school for their hard work and enthusiasm participating in the first competition.

‘Wild and Endangered’ is a project I hope to bring to other schools.  For further information please contact:

On 23rd May 2015 at Niagara on the Lake, Coyote Watch Canada will be holding ‘A Song Dog Celebration’, their first fundraising Gala event.  Coyote’s are known as ‘Song Dogs’ for their haunting vocal artistry and are one of the most adaptable and charming animals on the planet.

“Coyote” which was made exclusively for CWC’s ‘A Song Dog Celebration’ reflects on the harmony that once existed between coyotes and man, the destruction of that relationship, and the hope for a return to understanding and co-existence.

At the left of the piece are three images of coyotes. Coyotes form tight family bonds, one of the traits they share with humans. Like coyotes, First Nations people and Native Americans have suffered at the hands of ignorance and greed. While celebrating the harmony between native peoples and coyotes, “Coyote” also memorializes the loss experienced by both.

Reigning over the drawing is an image of Mother Nature as a native princess. The background is derived from Edward S. Curtis’s beautiful portrait of Hattie Tom, Chiricahua Apache (1899). Overlaid is an image of Audrey Hepburn’s face. Hepburn played Rachel Zachery in John Huston’s The Unforgiven (1960). The film, while flawed, attempted to explore the issue of racism towards Native Americans.

At the heart of the drawing is a coyote’s face layered through an image of the Rocky Mountains, suggesting the majesty of nature. A fifth coyote flashes through the piece, running towards the future. In Native American mythology, the coyote was seen as the Creator and sometimes took the form of man. Thus, layered through the coyote’s body is a representation of a native man, symbolizing the morphing of man and coyote into one being, forever entwined through mythology and history.

Finally, migrating monarch butterflies are projected on the coyote’s fur, representing hope and joy. They symbolize celebration of the work of Coyote Watch Canada in its quest for compassionate co-existence with coyotes and other wildlife.

This piece is for North America’s Song Dogs.

‘Coyote’ original drawing will be auctioned at ‘A Song Dog Celebration’

A Limited edition run of 50 A3 signed and numbered prints of ‘Coyote’ are available now with all profits going directly to Coyote Watch Canada:

A special thank you to wildlife advocate David Shellenberger for his kind introduction to CWC and for his help and advice towards ‘Coyote’.

Being privileged to work on an up and coming project for WCS-Malaysia Program has also brought about receipt of touching gifts – camera trap images all the way from the beautiful Malaysian jungle, capturing the unique and extraordinary wildlife of the Malay Peninsula. The stellar team at WCS-Malaysia Program, part of global conservation organisation the Wildlife Conservation Society, are working tirelessly to secure the future of Malaysian flora and fauna.  “A picture is worth a thousand words” and the following heartening images bring a message of joy and hope this Christmas, of thriving youngsters and WCS-Malaysia Program’s successes in the field.  Thank you to Melvin Gumal Ph.D., Director of WCS-Malaysia Program for these inspirational images.  For more information about their exceptional work visit www.wcsmalaysia.org.  Enjoy!

A very Merry Christmas and Best Wishes for 2015! 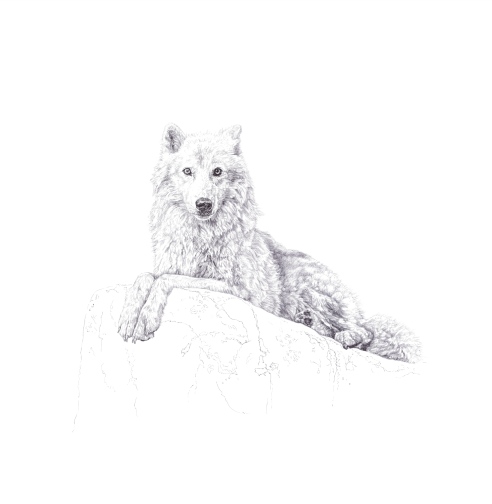 Prints of ‘Atka’, Ambassador Wolf of the Wolf Conservation Center, NY are now available to order with ALL profits donated to WWC, helping to protect wolves.

Luxurious Archival Pigment Prints on Hahnemühle Photo Rag 308gsm from the original Biro drawing of ‘Atka’ by artist Jane Lee McCracken are especially made to order crafted by prestigious photographer and printmaker http://mrjacklowe.com/ one of the best printmaker’s in the UK.

To purchase an ‘Atka’ print or for further information:

Magnificent Atka has dedicated his life to educating people about protecting his wild brothers and sisters. Wolves in America are having a bit of a hard time and need all the help they can get.

That’s why the original Biro drawing of ‘Atka’ was created and winged its way from Newcastle, England to New York State for WCC Wine and Wolves fundraiser on 12th December 2013.  Since 1999 WCC has been teaching people about wolves and their role in the environment.

If you’re not familiar with WCC already, have a look at the sterling work they do for wolves http://nywolf.org/