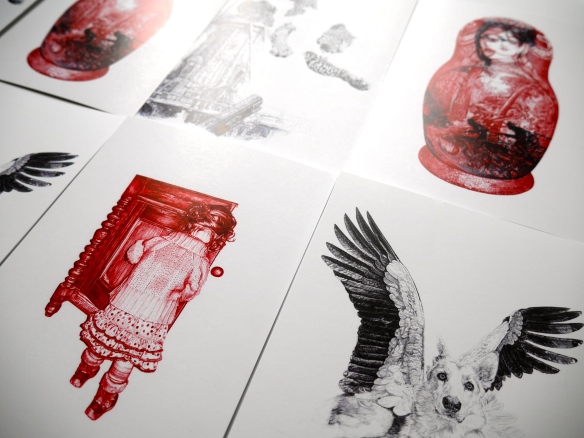 This spring sees the launch of Jane’s new greetings card range featuring a selection of her most iconic Biro drawings to date.  Printed in the UK, these high quality 15 x 21cm cards capture the intricate detail of each poignant drawing.

In stock at Newcastle-upon-Tyne’s premier design store Whosit & Whatsit, Jane’s cards are now available to purchase from her online shop.

Sets of 4 cards are individually wrapped with envelopes and priced at £10 including postage and packaging per set.

January has seen the publication of PAWS (Paxos Animal Welfare Society) Newsletter and a review of 2014’s successes for animals on the Greek island of Paxos.  PAWS brings voluntary veterinary care to the animals of the small Ionian island. With no practicing vets living on Paxos, islanders had to travel to Corfu to seek veterinary care for their animals until PAWS was founded in 2005 by tourists Lindsay Geddes and Linda Parker.

‘Cats of Paxos’ original Biro drawing will be exhibited from April 2015 on Paxos and auctioned later in the year to raise funds for PAWS.

Enjoy news from Paxos and PAWS! 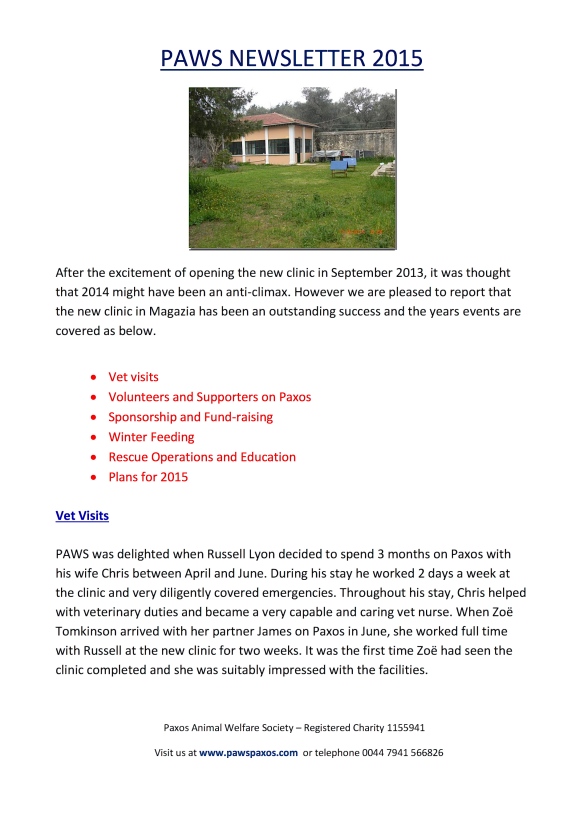 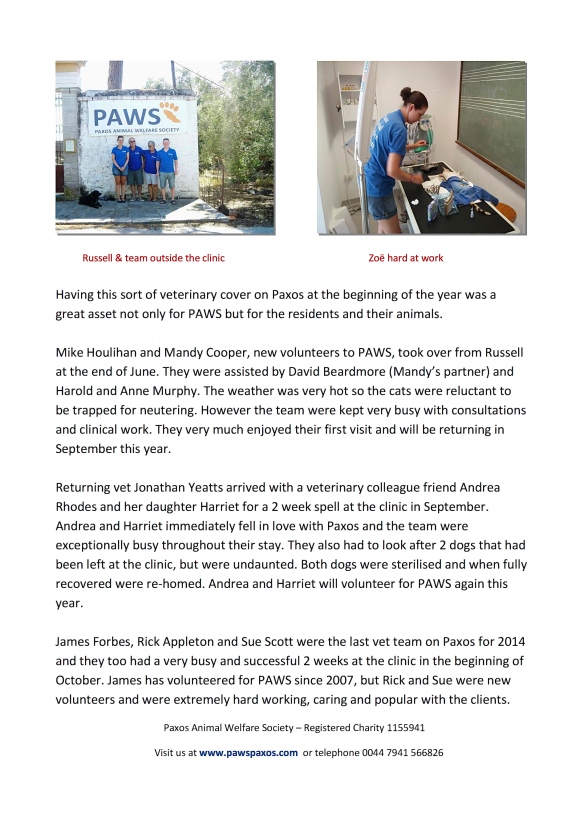 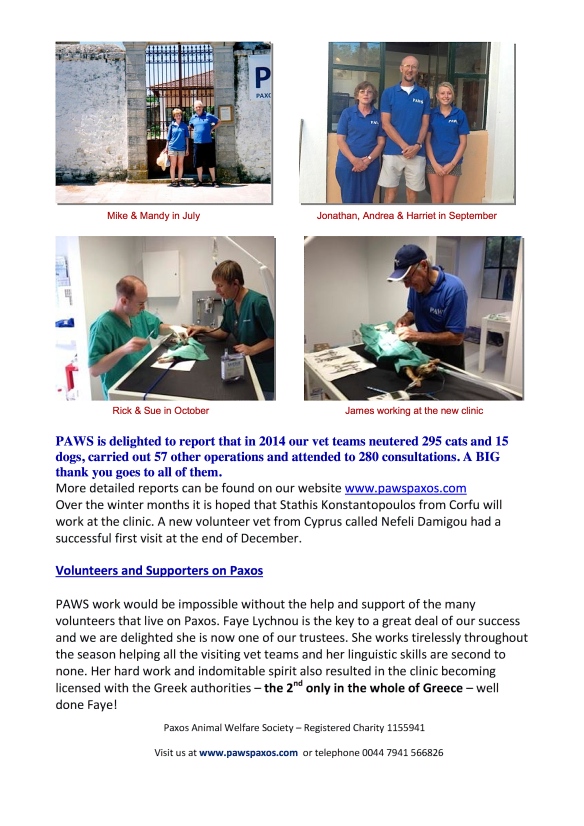 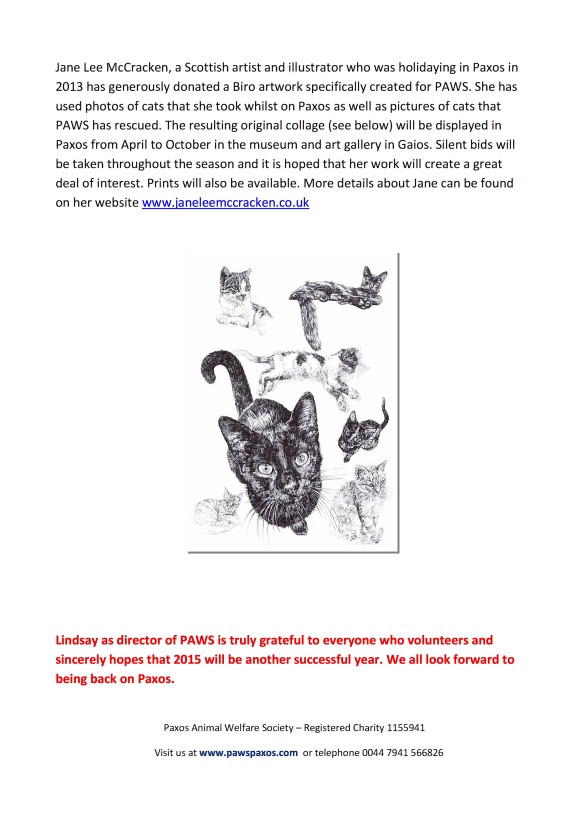 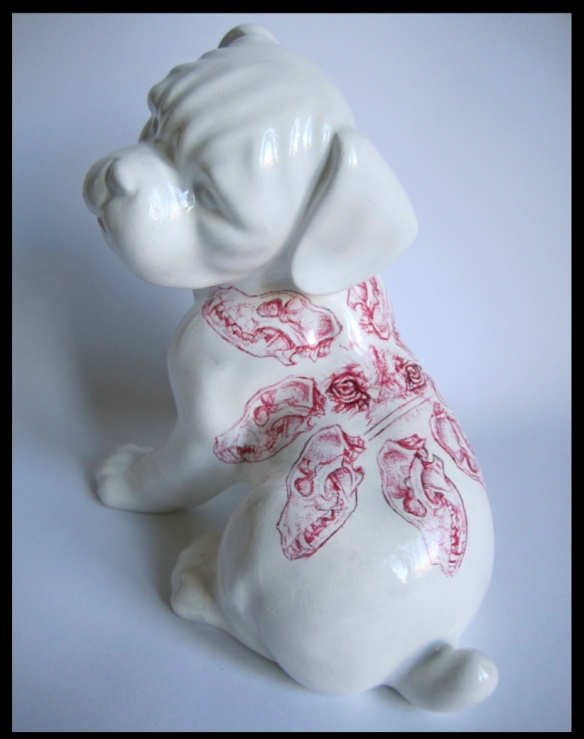 New work is on its way!  Prototypes ‘Girl and Dog’,  two of seven figurines, ‘The Dreamers’, with original Biro drawings on china forms part of a wider project about life and death in the animal world, both naturally and at the hands of man. 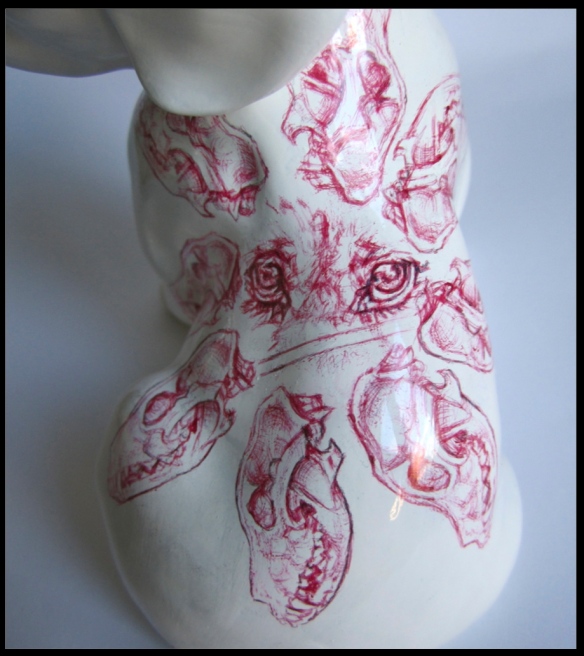 ‘Dog’ – A playful puppy looks towards its owner as it dreams and fears the dog meat trade – red Biro drawings of dog skulls form a pattern reminiscent of Chinese folk art or fabric patterns.  In the centre of the skull pattern are the eyes of a rescued caged dog being pedalled in the Chinese dog meat trade.   Originally domesticated from wolves, it is thought that dogs have been domesticated longest in East Asia.

Dogs have been eaten in China and other countries across the world for thousands of years.  Dog meat is still consumed in China, Vietnam, Korea and Switzerland.  These pieces question if there is a difference between eating dogs as opposed to other species consumption?  They also highlight the inhumane conditions dogs are kept in before slaughter and methods of slaughter.   A change in attitudes in dog consuming countries  has seen the rise of Animal Welfare groups, particularly in China, campaigning against the consumption of dogs as they are increasingly viewed as pets, guide-dogs and rescue dogs.  It is estimated that 25 million dogs are slaughtered each year for human consumption across the world.

‘Girl’ –  a girl dreams of her pet dog being snatched by dog peddlers.  She sees ‘mug shots’ of missing dogs on posters and worries that her dog will suffer the same fate.  Eyes of caged dogs sold for slaughter haunt her dreams – black Biro drawings of caged dogs sold for the dog meat trade in China, some of which were rescued by Chinese Animal Welfare groups.  The eyes of the dogs form a pattern on the girl’s clothing.

The base of the figurine is utilised as bars of a cage where dogs peer through the cage bars; or window panes where ‘mug shots’ of missing dog posters are pasted.  Taiwan banned the sale of dog meat in 2001 and whilst the practice still continues illegally, the leaving of the ‘Made in Taiwan’ label notes the ban that was introduced by the Taiwanese government.  Laid on its side, the folds of the figurine’s clothing resemble a landscape of Chinese mountains where the sets of haunting dogs’ eyes climb the food chain to their wolf origins (sets of wolf eyes are drawn at the top of the gown and in the centre).  The mountains also represent ‘tradition’ being ‘as old as the hills’ and if challenged the enormity of breaking tradition.  For people of many societies throughout the world the consumption of dog meat is banned, for many other dog meat consuming nations it is part of tradition.  However I believe the question must be asked – consuming an animal whom humans use to enhance our lives emotionally, are used to aid disabled people and ultimately used to fight aside us on the front line of life and death situations whilst not having the capacity to understand what is being asked of them – is this a fitting reciprocation for the duties they undertake willingly for us? 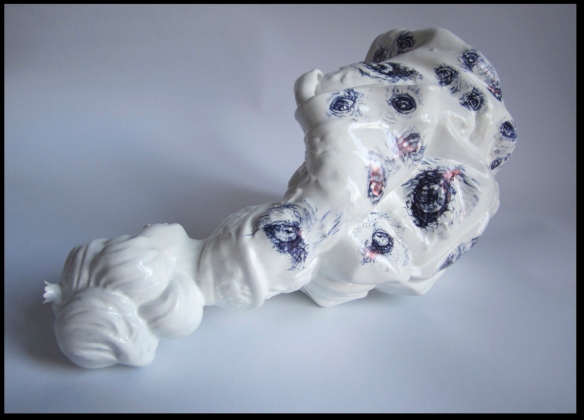 Inspired by Goya’s Los Caprichos, ‘The Dreamers’ represent the innocent physicality of sleep whilst the torrid kaleidoscope of dreams cascades through the brain.   ‘The Dreamers’ also represents the quiet moments of peace and daydreams before the inevitability of life’s realities steals ‘innocence’.  Dreams play out like films in our minds, abstract fragments of the brain’s data input of information and our fears and hopes.  Much of my work is based on the subject matter of loss through war and disaster or environmental destruction, represented in layered Biro drawings using stills from films often creating an abstracted phantasmagoria of images and thoughts.  Films transport and capture our minds just like dreams do; they face our fears, portray our hopes and can be therapeutic tools in our waking hours as dreams are deemed brain therapy in our sleep.

I made a random collection of figurines from local charity shops, so that my philosophy of simply using what is close at hand, such as a Biro for drawings was upheld with the choice of figurines available on each day.  Damaged and repaired figurines were still selected to retain the memory of the figurine’s previous life and owner.  Each figurine was then painted white, purifying them from the original manufacturers painted design and stripping each figurine back to the foundations of its physical representation thus creating a blank canvas.  This brings a sense of life to each figurine without the distraction of painted design before the original black Biro drawings are drawn onto the painted surface as well as white representing the purity of ‘a being’ at sleep.  An incredibly hard surface to draw on, these pieces were challenging and remain precious for the intimacy shared with each piece by holding them in my hands as I drew on them.

Further images will be released as this project continues.

I don’t normally write two posts in one day, but the cutest, ironical thing just happened.  I was busy hand sewing a miniature canary with a transfer of my drawing ‘Wolf the Canary’ as a representation of a cuckoo clock, to put inside a commission of ‘The Wolf’s House’.  Lily was on the floor sleeping.  I went to get the iron so that I could give the canary a last wee press before adding it to the house.  However the canary was nowhere to be seen!  I searched high and low for some considerable time – perhaps it had flown out the window!  Then I spied a piece of yellow silk under Lily’s paw.  Now Lily loves toys it has to be said – Dino Baby being the latest addition to her collection, flown all the way from the set of Breaking Bad, apparently high on crystal meth with those eyes!

However it never crossed my mind that Lily would have delicately picked the tiny canary up in her mouth (my Sherlock Holmes powers of elementary deduction cleverly worked that out!  Ok, maybe the canary was slightly damp!) to give it a cuddle!  Too small to prop between her paws, she was hugging it with one paw!

I managed to prize her latest conquest from under her paw to check it wasn’t damaged! She looked so sad I popped it next to her one last time.  Sorry Lily, this one’s not for you!

And the irony…Wolf the Canary symbolises the misinterpretation of wolves through fairy tales and the media – Lily could have destroyed the canary with ease but she tenderly looked after it!

For all those who requested to see the photo-shoot of Lily for the drawing ‘Red Horse and the Wolf Cub’ – here it is in brief!!

Lily on location relaxing during the shoot!

Lily’s first bed was a red velvet affair with gaudy gold tassels – we called it her ‘Princess Bed’ as it reminded us of the fairy tale ‘The Princess and the Pea’ (for all us children of the 70’s, remember the Ladybird edition of the tale and those fabulous illustrations?).

Lily is given Pengy as a gift for her hard work modelling.

She loved her wee bed!  Sadly it went the same way as the demise of ‘Pengy’, reduced to a small rag of red velvet!  Pengy was latterly known as ‘Pengy’s Foot’ when Lily realised she had teeth and would use them!  Sid from Toy Story would have been be proud of her. 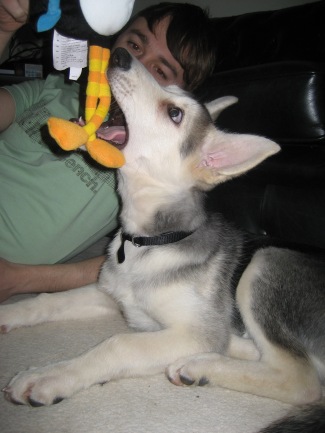 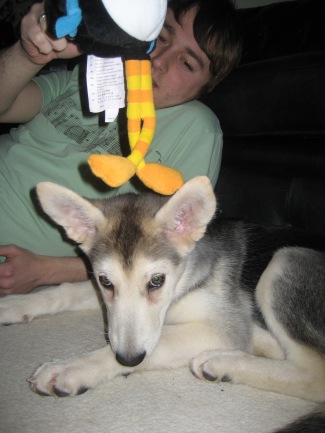 “I’m getting bored and sleepy now!”

Pengy’s foot resides somewhere in the dark recesses of Lily’s toy box!  Yes Lily has a toy box – for all you cynics out there who can be heard saying ‘typical childless person treating her dog like a baby!’ dogs are intelligent enough to differentiate between their toys and Lily knows each of her many (hence the need for a toy box!) toys by name and can often be found rooting around in her toy box looking for the particular mutilated creature she wants to play with at 5 o’clock sparrow am.  I always see play as an important part of Lily’s daily routine as it keeps her young at heart.  And can she play! 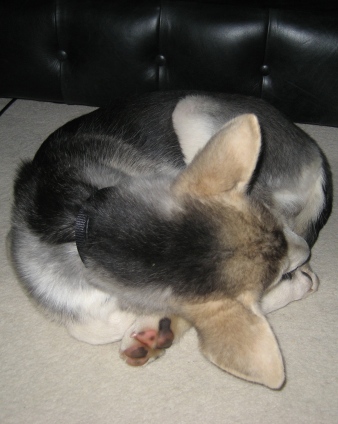 On a serious note many people, whether they have children or don’t have children, sadly or contentedly, or are dog or animal lovers, experience a strength of love for their dog that equates to the love of a family member because dogs are intelligent, pack animals with similar character traits to humans and therefore respond positively to love and affection.

And what the hell if there are many of us out there who love our dogs like children – they are after all as innocent and reliant upon us, in my opinion as a child is and to give dogs a happy, loving home is surely what they deserve after the legacy we have created through domesticating canines.  Should we not celebrate and promote positively that many of our species share an empathy with and a love for animals? Such empathy defines a nation as a compassionate modern society and a nation of animal lovers is something to be proud of. 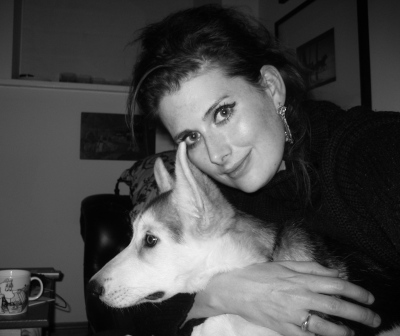 And this is the result of the photo shoot, Lily as the ‘Wolf Cub’.