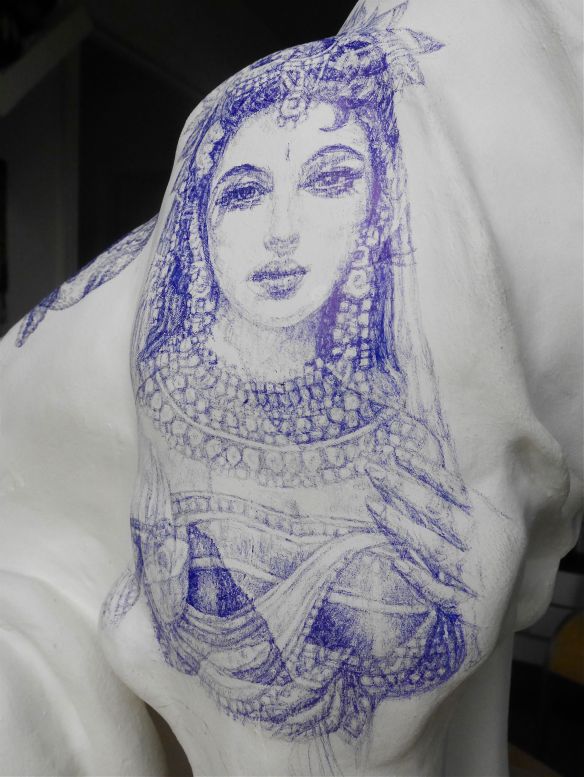 This blue Biro drawing is inspired by a vintage painting of Lakshmi and an image of a beautiful Italian film star!

Lakshmi’s curves are enhanced by drawing her body over the muscular shoulder of the tiger.Her head is positioned at 90 degrees to Vishnu’s head drawn on the tiger’s back.

Symbolism plays a large part in the work I make forming an intricate web of analogies. Using objects as I find them for making art is also an important part of the process; imperfections tell their own story and if you look closely there are scratches on the surface of the sculpture that have been deliberately retained.

Last weeks tattoo drawing ‘King of India’ was drawn over the tiger sculpture’s back leg.  Vishnu’s hand is layered through the Bengal tiger’s face.

This work in progress highlights the familiarity of tigers iconic beauty and their symbolic importance to humanity.

New work is on its way!  Prototypes ‘Machil’,  one of seven figurines, ‘The Dreamers’, with original Biro drawings on china, forms part of a wider project about life and death in the animal world, both naturally and at the hands of man. 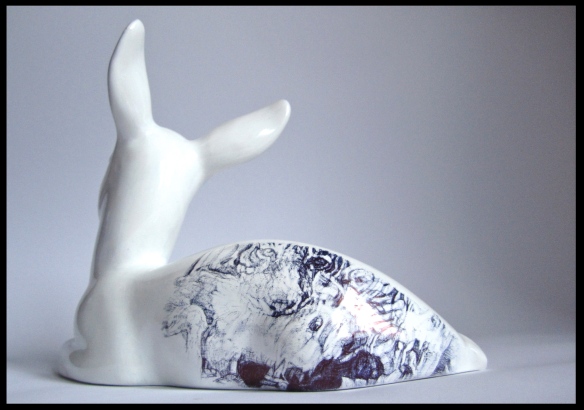 A restful fawn dreams of being hunted by the great tigress Machli – black biro drawing inspired by layers of still images taken of the wildlife documentary ‘Natural World: Queen of Tigers’ BBC 2012/13, Mike Birkhead Associates with Colin Stafford-Johnson.  Machli, the most famous tiger in the world is the pride of Ranthambore National Park, India.  Her life has been documented from cub to old age in two beautiful and moving films by Mike Birkhead Associates.  This piece represents the natural cycle of life and death in the animal world.  It also represents how vital indigenous prey species are for wild tigers.  Tigers are threatened by wildlife crime but also by habitat loss.  With an estimated 3200 tigers left in the wild there are now more tigers in captivity. 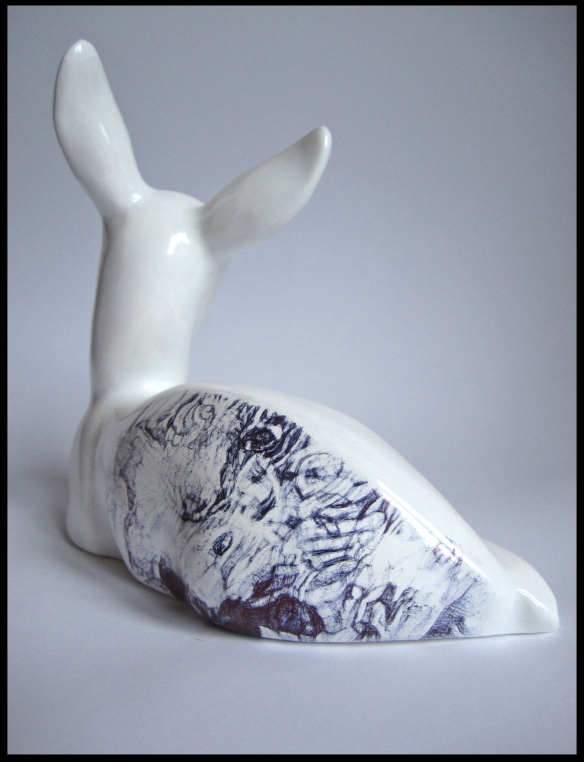 Inspired by Goya’s Los Caprichos, ‘The Dreamers’ represent the innocent physicality of sleep whilst the torrid kaleidoscope of dreams cascades through the brain.   ‘The Dreamers’ also represents the quiet moments of peace and daydreams before the inevitability of life’s realities steals ‘innocence’.  Dreams play out like films in our minds, abstract fragments of the brain’s data input of information and our fears and hopes.  Much of my work is based on the subject matter of loss through war and disaster or environmental destruction, represented in layered Biro drawings using stills from films often creating an abstracted phantasmagoria of images and thoughts.  Films transport and capture our minds just like dreams do; they face our fears, portray our hopes and can be therapeutic tools in our waking hours as dreams are deemed brain therapy in our sleep.

I made a random collection of figurines from local charity shops, so that my philosophy of simply using what is close at hand, such as a Biro for drawings was upheld with the choice of figurines available on each day.  Damaged and repaired figurines were still selected to retain the memory of the figurine’s previous life and owner.  Each figurine was then painted white, purifying them from the original manufacturers painted design and stripping each figurine back to the foundations of its physical representation thus creating a blank canvas.  This brings a sense of life to each figurine without the distraction of painted design before the original black Biro drawings are drawn onto the painted surface as well as white representing the purity of ‘a being’ at sleep.  An incredibly hard surface to draw on, these pieces were challenging and remain precious for the intimacy shared with each piece by holding them in my hands as I drew on them.

Further images will be released as this project continues.

For further information about tigers, please visit the amazing Save Wild Tigers, a global initiative dedicated to saving tigers in the wild . As part of my china and print series ‘In Homage to the Last Great Carnivores of Eurasia’ the first Biro drawing in the Siberian Tiger diptych was inspired by two things – a drawing by an old master and an iconic image of India.

The synonymous image of a Royal Bengal tiger bathing in a pool in Ranthambore National Park, India with its majestic ruined palaces, was the basis for my Russian fantasy of the Siberian tiger. Albrecht Dürer’s beautiful and beguiling drawing ‘Landscape with a Woodland Pool’ 1496, a photograph of a forest pool in Ussuriland and Ivan Shishkin’s painting, ‘The Forest of Countess Mordvinova’, 1891, form the inspiration for the background drawing layers, creating the fantastical setting for a bathing Siberian Tiger. 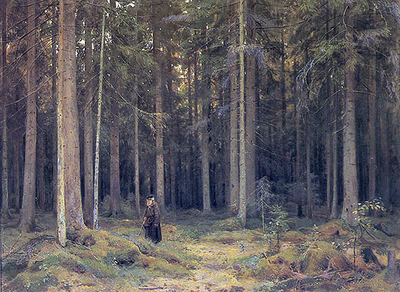 At the edge of the lake sits a Dacha birdcage from my own collection.  Reclining inside is a Siberian tiger, further suggesting the image of Royal Bengal tigers shading inside Indian palaces but also indicating the thousands of tigers kept in captivity in comparison with so few remaining wild tigers.  A giant Siberian tiger sweeps through the forest background, emulating the Udege and Nanai name for the tiger “Amba”, ‘Guardian of the Forest’.  Breaking through the forest is a cavalry of Red Army soldiers symbolising the devastation wreaked on the Siberian Tiger population, which was almost extinguished by both Red and White Armies around Vladivostok during the Russian Revolution.

On the right walks a tiger beside an Udege woman from a still photograph I took of ‘Amba the Russian Tiger‘, 2008, Gordon Buchanan, proclaiming the fragility of not only the tiger population but the indigenous people of Ussuriland.  The tiger in the pool looks beyond a sniper rifle hidden in the foliage, outside the picture towards ‘Bang!’ the second drawing in the Siberian Tiger diptych.  A skull with a bullet hole depicted in ‘Bang!’ indicates what the tiger in the pool is watching, a tiger hunt! 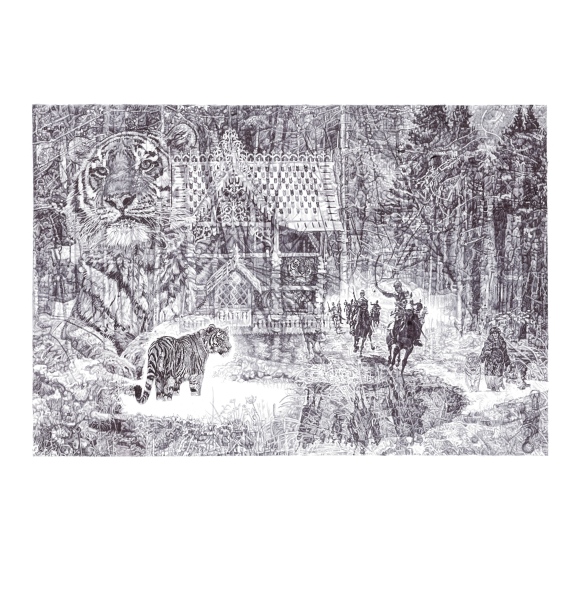